When I'm not on tour, I currently spend my time in Hampstead, London, with Sarah Ozelle, not only a highly sought-after singer, songwriter, and producer, but also my wonderful wife. As an experienced remote session musician I have two professional recording studios I use regularly, and you can find out more about my session setup here.

My band ‘Usonic’ was nominated for a MOBO award in 2011 for best jazz act with our album ‘Evolution’, and features Scott Henderson and Scott Kinsey of Tribal Tech.

I have a deep love for everything jazz which to me encompasses not only the big jazz names like Miles Davis, Dizzy Gillespie, Duke Ellington, Sinatra, Ella Fitzgerald, John Coltrane, but I also see jazz as a blend of every genre trying to find new ways to make music. Tigran Hamasyan, Forq, Jacob Collier, Robert Mitchell, Esperanza Spalding, Gregory Porter, Mark Guiliana, and Robert Glasper each come to mind as current genre-defying artists among many. 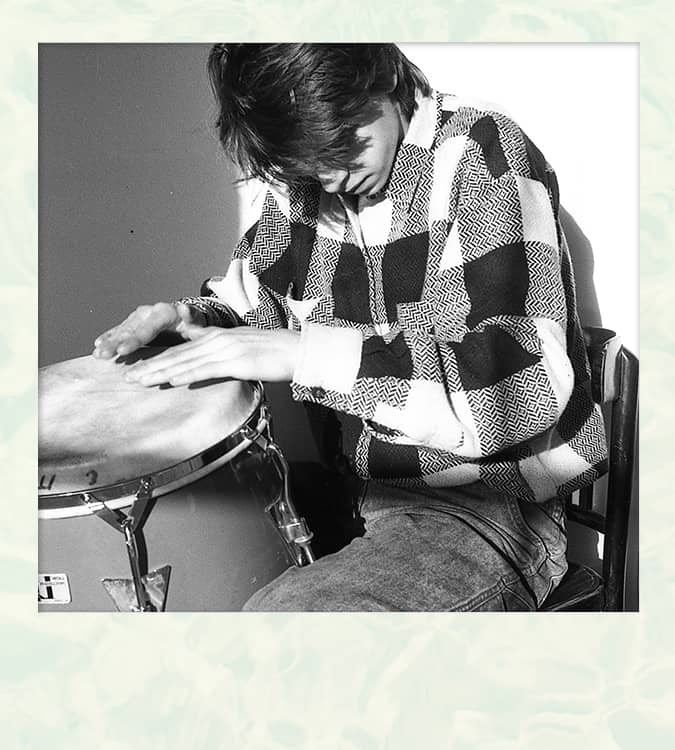 I was drawn to music at a young age. My father, Peter Bould, was a producer who worked with such Jazz luminaries as Gil Evans, Dizzy Gillespie, Stan Tracey and Tubby Hayes – and while many of these great musicians went on to be family friends of ours, it was Dizzy who noticed I had a passion for rhythm: I was picking out the odd sounds behind the music and trying to recreate them by bashing my older brother’s Soprano Sax instead of blowing it!

When I was 12, Dizzy invited me to Ronnie Scotts. I sat with Dizzy on the stage for what was to be my first and only conga lesson. He showed me some important first steps and asked me if I would look after the congas while he was away? Little did I know they were a gift!

I love the way Miles plays drums. He has such a percussive feel. Miles is a master of the kit and can make it sing, swing or hold it down as solid as a rock. He has great time and taste and can cover an enormous range of styles that he shifts between effortlessly.

He is a terrific live and studio player and has been in my band for over 30 years. We have been all over the world together playing a diverse range of venues from theatres to stadiums to jazz clubs in Japan.

At age 15 I ran screaming from school and straight into clubs, where they predominantly played Latin, Jazz, Funk and Reggae. I joined my first serious Funk band ‘SAVAJAZZ’ and through that met guitarist Dominic Miller, who took me under his wing. 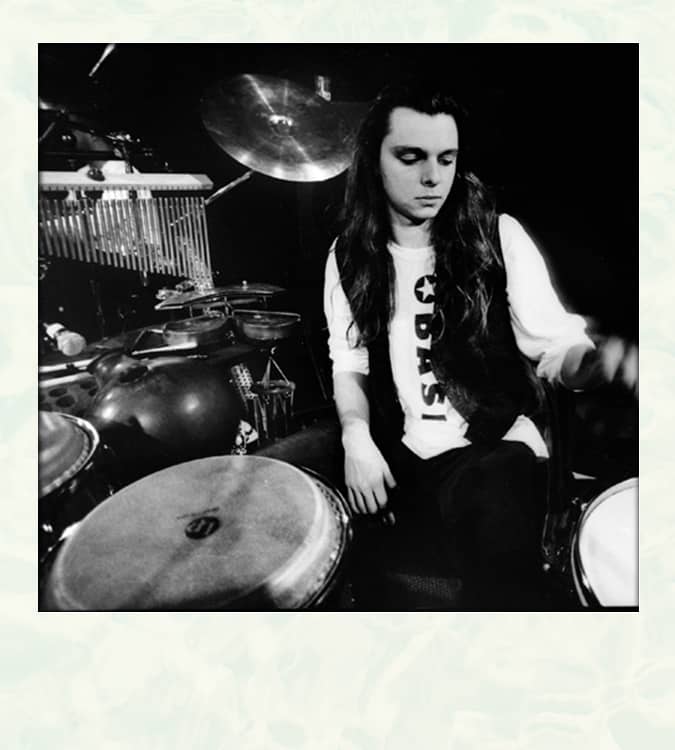 I’ve known Miles since the 80’s. Not only is he one of the finest percussionists and all round rhythmatists in the U.K. and Europe, he’s also one of my best friends.

When I was 17, while I was doing a latin jazz gig in a small bar in London, I was spotted by Robert Palmer. He was very cool (of course he was). After the gig he paid me the best compliment - that while I was hidden at the back with my head-down, lost in the music, he was “listening to me.” He asked if I would be up for doing an acoustic set live radio session for him and it led to further recording and gigging.

It also led to meeting Julia Fordham, who was instrumental in getting me connected in the session scene. Julia hired me to tour and record and through that I met Hugh Padgham, the fantastic producer / engineer who was producing Julia’s second album Porcelain, and Grant Mitchell, a brilliant producer / piano player who is the backbone to many great artists' music. When Julia and Hugh asked if I could recommend a guitarist who played acoustic, specifically nylon-string guitars, I was delighted to introduce Dominic Miller to the group.

I went on to record and / or tour extensively with many artists, including Sting, Daryl Hall, Joe Cocker, Level 42, Cher, Eternal, The Lighthouse Family, Incognito, The Pasadenas, The Beloved, Suggs, Shara Nelson, and Simply Red. Predominantly I worked as a percussionist and being able to produce a diversity of sounds was valuable, as many of the artists (particularly singer songwriters) wanted a softer approach to drums. 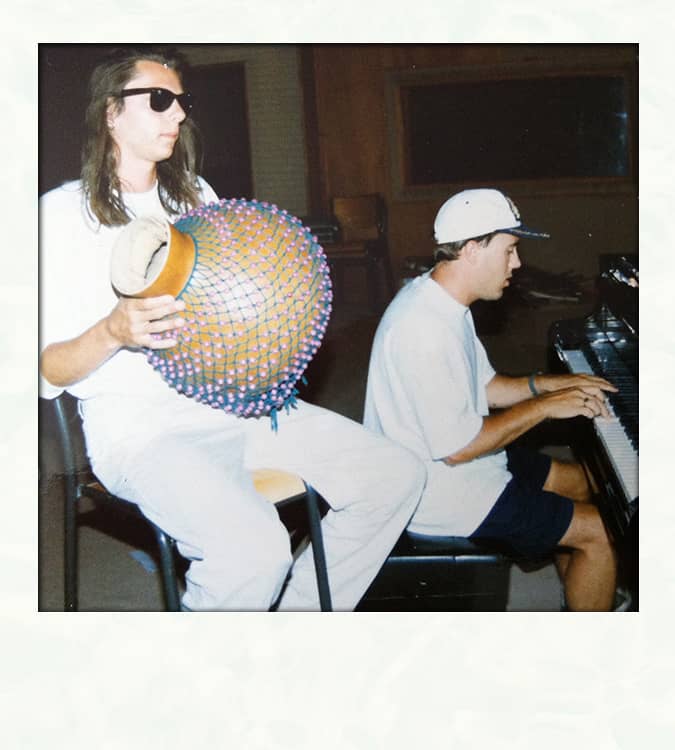 I was introduced to Miles a few years ago via an engineer @ RAK, who said ‘he's the best - (or at least one of the best percussionists in the UK).’

Annoyingly, he is also an amazing drummer - and worse - a really really nice guy, who in the studio and on remote sessions is always consummately professional, happy to take direction, but also able to come up with ideas that will blow you away. 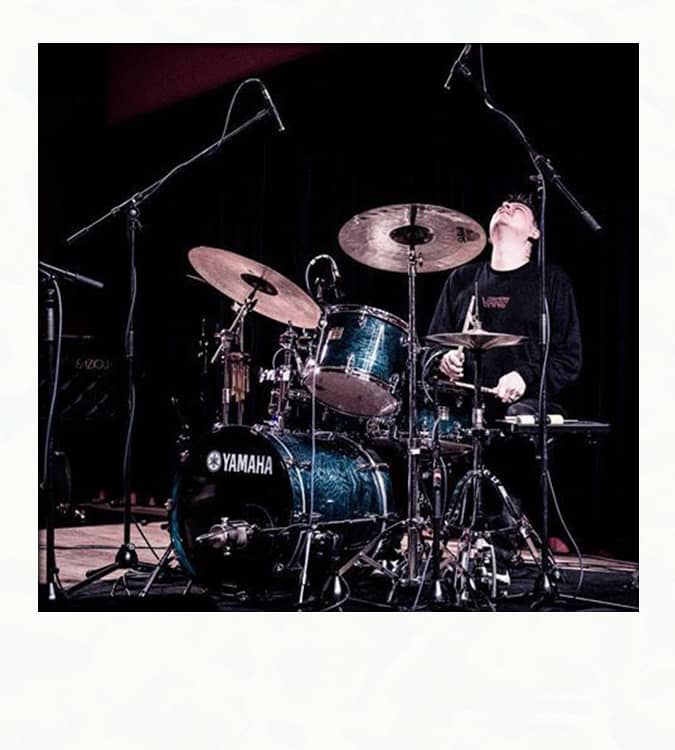 Through a chance meeting at a session and thanks to producer/pianist Grant Mitchell I got to work with Steps Ahead. Mike Mainieri was in the studio next door to us working on an album. He liked the jazz fusion tracks I had written with my close friend Spencer Cozens, and offered to put his stamp on one. We ended up collaborating with Steps Ahead on the track ‘Agitate the Gravel’.

I gigged with my own bands Goosebump, a Funk Rock band signed to Warner Chappell, and Peoplespeak, a fusion project. I also got to tour with John Martyn, and later with Julia Fordham. I toured and recorded with Billy Ocean and his amazing band and went on to co-write with Scott Firth and Billy the title song on his 2010 album “Because I Love You”.

I got involved in the early days of samples and loops and have done remote session work for over 25 years. With the brilliant Danny Cummings, we recorded a sample CD called ‘The Rhythm of Life’ which went on to be used by artists including Pat Metheny, George Michael, Brownstone, Joan Armatrading and many more. We found it reappeared in all sorts of things like the NYPD Blue soundtrack and underscoring movies. As Audiovirus, a loop break beat collaboration with Mike Westergaard, I made two more sample CDs called ‘Intravenous’ and another specific drum and percussion CD called ‘The Progression’. They became a calling card: you could find copies of those CDs in the offices of the biggest production studios.

I used his fantastic shakers Congas, djembes and tambourines on countless recordings, I couldn’t believe how versatile these long groove samples and single hits were.

His ability to build up layers of wonderful percussion transforms any song into a work of art is nothing short of alchemy.

Where can I find more?

I'm happy to add to your tracks. Here are some examples that might inspire you.

Head over to Audionetwork for a listen to my library music compositions.

Visit the Usonic page to find out more about the band.

And you can also see some experiments on YouTube when I finish setting them up.